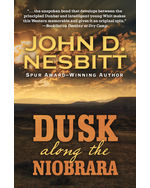 Dusk Along the Niobrara

Dunbar, working on a ranch in the Niobrara country in Wyoming, connects the death of a hardscrabble homesteader with the death of an old horse trader some fifteen years earlier. As Dunbar goes to work on a corral project in town and then on fall roundup, more murders take place – a wandering drunk who has picked up gossip in an alehouse, and then the proprietor of the alehouse. People who know too much are being silenced. Then, an old woman named Verona tells of an ancient crime on Old Woman Creek, where a sheepherder was killed and his partner escaped. Can Dunbar bring justice to the Niobrara country?