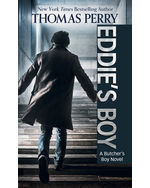 Michael Shaeffer is living peacefully in England with his aristocratic wife. When her annual summer party brings strangers to their house, and with them, an attempt on Michael’s life. He’s thrust into action, luring his lethal pursuers to Australia before venturing into the lion’s den to figure out why the mafia is after him again.

Eddie’s Boy jumps between Michael’s current predicament and the past, between the skillset he now ruthlessly and successfully employs and the training that made him what he is. Will he be able to escape this new wave of young contract killers, or will the years finally catch up to him?

“Perry makes the distant past as vivid and immediate as the relentlessly paced present.”

“Perry . . . builds suspense with all the subtlety of a master chef nursing a risotto to a buttery perfection. It’s nothing new to call Perry a master of the genre, but it’s no less true for being widely acknowledged.”