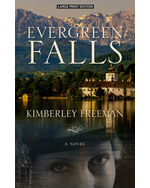 It’s 1926 and Violet Armstrong is a waitress at the grand Evergreen Spa Hotel, where Australia’s glitterati are spending a winter vacation. Among the guests who remain are Sam and Flora Honeychurch-Blacks, a wealthy brother and sister ensconced in the hotel for an extended stay. Violet and Sam have an attraction that is as passionate as it is forbidden as the hotel closes down for the winter season. When a snowstorm moves in, trapping them all, no one could have imagined what would unfold. The group must let their secrets be buried by the snow, but all snow melts, exposing the truth beneath . . .

Eighty-eight years later, Lauren Beck takes a job at a café in the Blue Mountains, built as the first stage of the Evergreen Spa Hotel’s return to grandeur. There she meets Tomas, the Danish architect overseeing the project. As their budding relationship grows, Lauren discovers a series of passionate love letters dating back to 1926 that allude to a whirlwind affair — and a tragic secret. Lauren begins to unravel this long-forgotten mystery, but will discovering the truth finally make her brave enough to take a risk that could change her entire life?