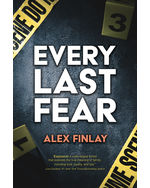 NYU student Matt Pine’s family have been found dead from an apparent gas leak while vacationing in Mexico. The local police claim it was an accident, but the FBI and State Department seem far less certain ― and they won’t tell Matt why. This isn’t the first time the Pine family has been thrust into the media spotlight. Matt’s older brother, Danny ― currently in prison for the murder of his teenage girlfriend ― was the subject of a viral true crime documentary. Now, as the deaths in Mexico appear increasingly suspicious and connected to Danny’s case, Matt must unearth the truth behind the crime that sent his brother to prison ― forcing him to confront his every last fear.

“Finlay imparts nuance via a prismatic narrative that jumps back and forth in time, examining both tragedies from multiple angles. Those who favor character-driven crime novels will find much to admire.”

“Finlay’s debut is a fast-moving, often-emotional portrayal of a family in turmoil . . . fans of a good chase scene won’t be disappointed, either.”