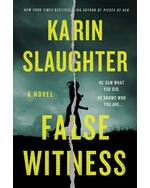 Defense attorney Leigh Collier gets a call from one of the firm’s partners who wants her to defend a wealthy man accused of multiple counts of rape. Though wary of the case, it becomes apparent she doesn’t have much choice if she wants to keep her job. When she meets the accused face-to-face, she realizes that it’s no coincidence that he’s specifically asked for her to represent him. She knows him. More to the point, he may know what happened over 20 years ago, and why she has spent two decades avoiding her past. Suddenly she has a lot more to lose than this case. The only person who can help is her younger, estranged sister Callie — the last person Leigh would ever want to drag into this after all they’ve been through. But with the life-shattering truth in danger of being revealed, she has no choice.

“Slaughter doesn’t save her twists for the end, instead peppering them throughout the intricately layered story amid stomach-churning near misses and gripping character revelations. Equal parts hyperrealistic thriller and epic tragedy, Slaughter’s latest is pitch-perfect storytelling.”