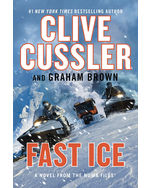 
Fast Ice: A Novel from the NUMA® Files

In the early days of World War II, the infamous German Luftwaffe embark upon an expedition to Antarctica, hoping to set up a military base to support their goal of world domination. Though the military outpost never comes to fruition, what the Nazis find on the icy continent indeed proves dangerous . . . and will have implications far into the future. In the present day, pitted against a determined madman and a monstrous storm, Kurt Austin, his assistant Joe Zavala, and the NUMA team embark for the edge of the world to unravel the Nazi-era plot in order to save the globe from a freeze that would bury it once and for all.