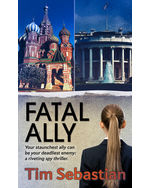 After five years’ silence, a British intelligence asset has made contact from Moscow. Claiming to be in possession of an explosive piece of information, he wishes to defect to the West. The carefully-planned operation however goes catastrophically wrong, the would-be defector ruthlessly betrayed by a rogue element at the highest level of US government. As a result, MI6’s Margo Lane is ordered to deliver a message the White House won’t forget. It’s mission that will take Margo to the violent heart of contemporary Russia and the edge of the civil war in Syria — and finally to a terrifying personal decision she had hoped she would never have to make.