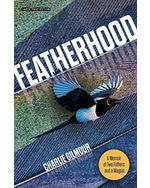 
Featherhood: A Memoir of Two Fathers and a Magpie

One spring day, a baby magpie falls out of its nest and into Charlie Gilmour’s hands. Magpies, he soon discovers, are as clever and mischievous as monkeys, and this one quickly steals his heart. While caring for Benzene, Charlie comes across a poem written by his father, an eccentric British poet named Heathcote Williams, who vanished when Charlie was six months old. Charlie is drawn to the poem, in which Heathcote describes how an impish young jackdaw — like magpies, also a member of the crow family — fell from its nest and captured his affection. Over time, Benzene helps Charlie embrace the role of father himself.