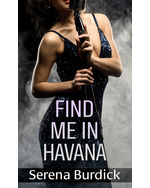 
Find Me in Havana

Cuba, 1936: When Estelita Rodriguez sings in a hazy Havana nightclub for the very first time, she is nine years old. From then on, that spotlight of adoration — from Havana to New York’s Copacabana and then Hollywood — becomes the one true accomplishment no one can take from her. Not the 1933 Cuban Revolution that drove her family into poverty. Not the revolving door of husbands or the fickle world of film. Thirty years later, her daughter, Nina, is blindsided by her mother’s mysterious death. Seeking answers, the grieving Nina navigates the troubling memories of their life together and discovers how much Estelita sacrificed to live the American dream on her own terms.

“A poignant and gripping account of the life of Cuban actress Estelita Rodriquez . . . With great skill, Burdick weaves a heartbreaking narrative of a star’s rise and fall . . . A deeply affecting tragedy.”