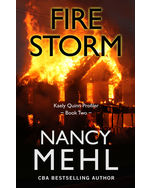 When FBI profiler Kaely Quinn's brother asks her to help care for their mother, she heads to Darkwater, Nebraska. Upon arrival, she learns the town has experienced a series of fires, which the fire chief attributes to the misuse of space heaters. Kaely, however, sees a pattern and suspects they were no accident. After another blaze, Kaely and her team — including her partner, Noah Hunter, and a local firefighter — begin an investigation that swiftly leads them down a twisted path. When the truth is finally revealed, Kaely finds herself confronting a madman who is determined that his last heinous act will be her death.