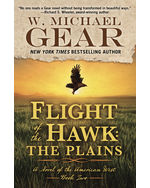 Flight of the Hawk: The Plains

John Tylor has a free shot into the wilderness where no one will ever know his name or his shame. As he and Will Cunningham head west into the northern Plains, Tylor rescues a wounded hawk, which he had dreams foretelling the event, and then run smack into a party of Arapaho. Fortunately, guided by visions, Gray Bear and his desperate little band of Shoshoni, arrive in the nick of time to drive off the Arapaho. Now, Tylor and company are desperate to make the return to Shoshoni country and the safety of the mountains. Sometimes the simplest of dreams are the hardest to fulfill.