White House executive chef Olivia Paras has always believed that her father was an honorable man. Then a visit to her mother reveals that he was dishonorably discharged from the army. Even more shocking‚ Olivia learns that he was brutally murdered because someone suspected him of selling corporate secrets. Refusing to accept that her father is a scoundrel‚ Olivia enlists the help of her boyfriend and sets out to prove his innocence.

Home of the Braised 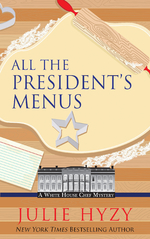 All the President's Menus