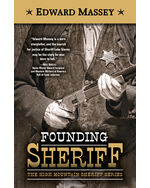 Luke Simms, founding sheriff of newly formed Summit County, in the Utah Territory, finds a murdered young woman in her bed and tracks the husband high into the mountains. He captures him but makes the decision not to kill the man on the spot — a decision that sets in motion years of struggle to create a tradition of justice where none existed before. But while capture comes swift, conviction takes longer. Life in a growing frontier town either demands frontier justice or unfolds its willingness to let the murderer avoid his fate, threatening the founding sheriff’s promise of justice to the murdered girl’s mother.