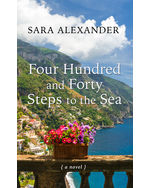 Four Hundred and Forty Steps to the Sea

On southern Italy’s Amalfi coast, Santina is spending her final days at her home, a magnificent eighteenth-century palazzo. To decide its fate, she must confront the choices that led her here so long ago. In 1949, Positano is shaking off the dust of war. Young Santina takes domestic work in London as housekeeper to a British major and his creative, impulsive wife, Adeline. When they move to Positano, she raises their daughter as Adeline’s mental health declines. Years pass while Santina navigates complicated feelings for a man who is much more than an employer — and hides secrets that could shatter the only home she knows.