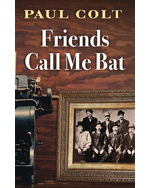 William Barclay “Bat” Masterson lived an extraordinary life that would be impossible to imagine. If it weren’t true, no one would believe it. Bat Masterson lived the West when the West was wild. His significance in Western history remains largely unknown to most of us. His story encounters some of the West’s most deadly gunfighters and dangerous desperados. He counted among his friends a veritable “Who’s Who” in old West history. He walked away from his Western adventures to live out the last twenty years of his life as a sportswriter for a New York daily newspaper. Friends Call Me Bat is his story, complete with an otherworldly twist at the end.