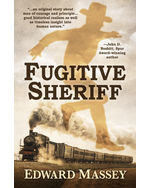 July 24, 1883. Deputy John Willford Simms wrests the bloodied star from his murdered father’s chest and pins it on, “My father’s star makes me sheriff.” The mayor protests, “You’ll be a fugitive sheriff.” They both know John Willford has a bounty on his head because he took a second wife at the Mormon bishop’s bidding fourteen years before. It matters little. Across the high mountains of Summit County, Utah Territory, Sheriff Simms hunts his father’s killer for four years, while a U.S. marshal, leading his fallen-away Mormon deputies, hunts the sheriff. When the marshal finally captures Simms, will the community rally around the sheriff to engineer his escape?