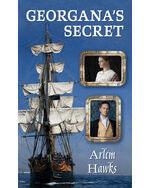 Georgana Woodall dreams of freedom from her past and freedom from her secret. She has been living on her father’s ship for years, disguised as a cabin boy named “George.” But hiding her true self is becoming more difficult, and she yearns to break free of her life on the sea. Lieutenant Dominic Peyton’s dedication to His Majesty’s Royal Navy claims his full attention. Determined to prove himself to his new captain, when Lieutenant Peyton sees the captain’s cabin boy being harassed by the crew, he takes the boy under his wing. Georgana quickly loses her heart to Dominic, but needing to maintain her disguise, she is convinced nothing can come of her affection.