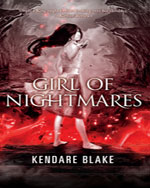 It’s been months since the ghost of Anna Korlov opened a door to hell in her basement and disappeared into it‚ but ghost hunter Cas Lowood can’t move on. His friends remind him that Anna sacrificed herself so that Cas could live — not walk around half dead. He knows they’re right‚ but in Cas’s eyes‚ no living girl he meets can compare to the dead girl he fell in love with. Now he’s seeing Anna everywhere … and these aren’t just daydreams.

Other titles in this series available while supplies last:
Anna Dressed in Blood