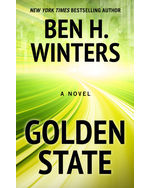 In a society that values law and truth above all, Laszlo Ratesic is a nineteen-year veteran of the Speculative Service. Located where California once stood, the Golden State was formed by like-minded Americans after the erosion of truth and the spread of lies made public life and governance impossible. Here, knowingly contradicting the truth is the greatest crime — and stopping it is Laz’s job. He is one of the few permitted to harbor untruths, to “speculate” on what happened. But the Golden State is less a paradise than its name suggests. And when those in control twist facts for nefarious ends, the Speculators are the only ones with the power to fight back.