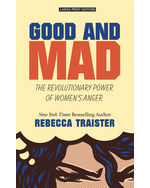 Good and Mad: The Revolutionary Power of Women's Anger

In 2018, women’s anger seems to have erupted into the public conversation. But long before the Women’s March and the #MeToo movement, female anger was both politically catalytic and politically problematic. With eloquence and fervor, Rebecca Traister tracks the long history of women’s anger as political fuel: from suffragettes marching on the White House to office workers walking out after the Clarence Thomas Supreme Court confirmation. Highlighting a double standard held against women by all sexes, Traister offers a glimpse into the galvanizing force of women’s collective anger, which, when harnessed, can change history.