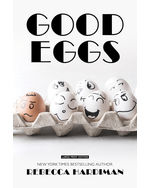 When Kevin Gogarty’s irrepressible 83-year-old mother, Millie, is caught shoplifting yet again, he has no choice but to hire a caretaker to keep an eye on her. Kevin, recently unemployed, is already at his wits’ end tending to a full house while his wife travels to exotic locales for work, leaving him solo with his sulky, misbehaved teenaged daughter, Aideen, whose troubles escalate when she befriends the campus rebel at her new boarding school. Into the Gogarty fray steps Sylvia, Millie’s upbeat home aide who appears at first to be their saving grace until she catapults the Gogarty clan into their greatest crisis yet.

“In her poignant and often hilarious family-drama-turned-caper debut, Hardiman masterfully inhabits the lives of three generations of the Gogarty family . . . the sprightly plot is deepened by explorations of the human condition.”

“Hardiman’s rollicking debut dives into the stories of a good-hearted but mischievous Dublin family . . . in this hilarious, zippy novel, nothing is as it seems . . . Full of surprises, Hardiman’s endearing novel stands out for its brilliant insight into the mixed blessings of family bonds.”