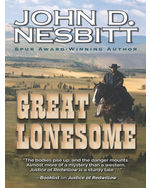 Reese Hartley has come to Wyoming to settle on his own land, but his cattleman boss expects his hired men to turn their homestead claims over to him. When he resists, he’s let go. Then he meets Muriel, who has come west to look for land, but whose cousins want to exploit her. When a cowboy and an underage female cousin of Muriel’s are both found dead, suspicion falls on Hartley. When the real villain flees, he’s pursued into the bluffs and canyons to a deadly showdown. Through all of this, can Hartley and Muriel follow through with their plans to take up homestead claims in an area called the Great Lonesome?