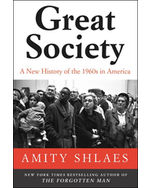 Great Society: A New History of the 1960s in America

In Great Society, Amity Shlaes argues that just as Franklin Delano Roosevelt’s New Deal overshadowed a generation of forgotten men, Lyndon B. Johnson’s Great Society gave rise to a silent majority, a coterie of dispossessed citizens — made famous by Richard Nixon and celebrated by Donald Trump — who rejected what they saw as the federal government’s overreach. Drawing on her classic economic expertise and deep historical knowledge, Shlaes challenges the traditional narrative of 1960s America and Johnson’s experiment, recasting the story of the Great Society as a tale of hubris that remains consequential for America fifty years later.

Contemporary Americans share many of the concerns that bedeviled Presidents Kennedy and Johnson and their voters. Racial differences, economic opportunity and outcomes, abuse of political power, and establishment corruption trouble us now just as these issues preoccupied the nation then. Yet today, poverty remains intractable and is actually growing, and the costs of programs such as Medicare and Medicaid are spiraling as the number of people claiming benefits grows. The question the Great Society tried to answer remains the same: how can we build a better future for all Americans? Shlaes contends that only an understanding of the historical record can make optimism — and practical solutions — possible.