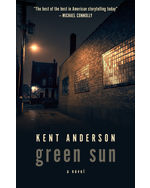 Oakland, California, 1983, is churning with violent crime and racial conflict. Officer Hanson left academia for the life-and-death clarity of police work, a way to live with the demons that followed him from Vietnam. Every day tests the boundaries between the man he wants to be and the law officer he’s required to be. Then an off-duty shooting forces him to face who he is. Kent Anderson returns after two decades with this dazzling novel about justice, character and fate, set in an American city at war with itself.