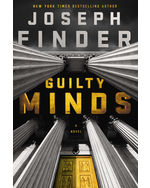 The chief justice of the Supreme Court is about to be defamed, his career destroyed, by a powerful gossip website that specializes in dirt on celebs and politicians. Their top reporter has written an exposé claiming that he had liaisons with an escort, a young woman prepared to tell the world her salacious tale. But the chief justice is not without allies and his greatest supporter is determined to stop the story in its tracks.

Nick Heller is a private spy — an intelligence operative based in Boston, hired by lawyers, politicians, and even foreign governments. A high-powered investigator with a penchant for doing things his own way, he’s called to Washington, DC, to help out in this delicate, potentially explosive situation.

"Finder really knows his way around a thriller, and his sensibilities about Washington, scandal, and the immediacy and threat of digital publishing and electronic surveillance seem chillingly plausible. This is an exciting, insightful thriller with finely sketched characters in other words, a sure bet in public libraries."

"[A] tight plot, sharp dialogue, and a cast of intriguing characters keep the story a cut above the genre pack."

"Finder shows off his top-notch storytelling skills, moving with ease from high places to low in the nation's capital."