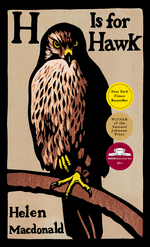 H Is For Hawk

When Helen Macdonald's father died suddenly on a London street, she was devastated. An experienced falconer, she'd never before been tempted to train one of the most vicious predators, the goshawk. But in her grief, she saw that the goshawk's fierce and feral temperament mirrored her own. She adopted Mabel, turned to the guidance of The Once and Future King author T. H. White's chronicle The Goshawk, and began her life-changing endeavor.

"In this profoundly inquiring and wholly enrapturing memoir, Macdonald exquisitely and unforgettably entwines misery and astonishment, elegy and natural history, human and hawk."