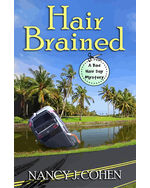 When hairstylist Marla Vail’s best friend is hurt in a suspicious car accident, Marla assumes guardianship of her infant son. No sooner does Marla say, “Baby want a bottle?” than she’s embroiled in another murder mystery. Her husband, Detective Dalton Vail, determines the crash may not have been an accident after all. But then, who would want Tally — or Ken in the car with her — out of the way? As Marla digs deeper into her friends’ lives, she realizes she didn’t know them as well as she’d thought. Nonetheless, it’s her duty as their son’s guardian to ensure his safety, even if it means putting her own life at risk. Can she protect the baby and find the culprit before someone else ends up as roadkill?