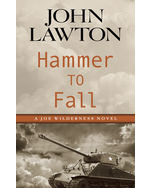 Bored by his work and with nothing to spy on, Joe Wilderness strikes a deal with his old KGB pal Kostya to smuggle vodka into the USSR. But there’s something fishy about why Kostya has suddenly turned up in Finland ― and MI6 intelligence from London points to a connection to the mining of cobalt in the region, a critical component in the casing of the atomic bomb. Wilderness’s posting is getting more interesting by the minute, but more dangerous too. Hammer to Fall is a gripping tale of deception and skullduggery — a page-turning story of the life of the British spy.

“Lawton does a brilliant job of incorporating backstory here, deepening our understanding of and feelings for rule-breaking Joe, who cares more for people than governments, while delivering a jaw-dropping finale that will leave readers palpitating for more.”

“Lawton scores another hit with his third Joe Wilderness novel . . . Terrific writing, a complex plot with a twist ending, and a roguish lead will have readers eagerly awaiting his next adventure.”

“By turns witty, erudite, and exciting and supporting a host of interesting characters, imaginary and historical . . . Not one sour note. A terrific thriller: fun, satisfying, and humane.”