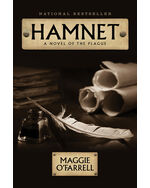 
Hamnet: A Novel of the Plague

In 1580’s England, during the Black Plague, Agnes walks her family’s land with a falcon on her glove and is known throughout the countryside for her unusual gifts as a healer. Once she settles with her husband on Henley Street in Stratford-upon-Avon, she becomes a fiercely protective mother and a steadfast, centrifugal force in the life of her husband, whose career on the London stage is taking off when their beloved young son succumbs to sudden fever.

Hamnet is a re-imagining of a boy whose life has been all but forgotten, and whose name was given to one of the most celebrated plays of all time.