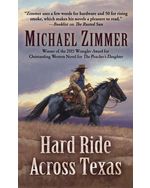 Nineteen-year-old Gage Pardell didn’t intend to kill Henry Kalb when he rode into Shelburn, Texas, to confront the son of the county’s richest man. He just wanted justice for what Kalb had done to his sister. Now Henry is dead and Gage is on the run from a gang of bounty hunters hired by his father. With nowhere else to go, Gage heads for the far-flung buffalo ranges of West Texas. There, he learns what it means to stand up for himself against a lawless frontier, a kill-crazy buffalo hunter, and the men Kalb keeps sending after him. Realizing he can no longer live this way, Gage finally returns home, completing the journey he began the night he killed Henry Kalb.