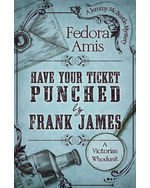 Have Your Ticket Punched by Frank James

After the Civil War, Frank and Jesse James earned fame as the most notorious robbers of banks and trains who ever lived. Jesse died in 1882. Frank went straight. November of 1898 found him punching tickets in a St. Louis theatre. Against this backdrop, journalist Jemima “Jemmy” McBustle investigates the death of a handsome athletic fellow. She chases leads through the boxing clubs and illegal bouts of 1898 St. Louis. Clues lure her across the city on a frantic chase from theatre to the city jail, exploring the seedy world of patent medicine makers flourishing in the opiate trade.