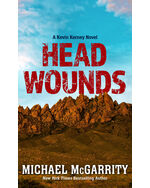 Sheriff’s Detective Clayton Istee catches a bizarre double homicide at a Las Cruces hotel. The murders show all the signs of a signature hit, but crime databases reveal no similar profiles. Clayton discovers that six months prior the couple had walked out of a nearby casino with $200,000 of a high-stakes gambler’s money. He also learns the crime had been hushed up by a DEA agent, who recruits Clayton for a mission to seize the Mexican drug lord responsible for the killings. Thrust into the world of drug wars and corrupt cops, Clayton duels with an assassin poised to kill him in a ferocious climax to the Kevin Kerney series.