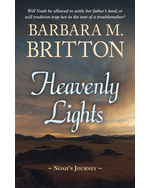 Noah has tended her father’s herds since she was a girl. She plans to make her sisters wealthy with livestock. When a clansman takes a liking to the shepherdess, his scheme may snatch her from the fields she loves. Only Jeremiah understands Noah’s gifts with animals. After the walls of Jericho collapse, the battle of Ai leaves Jeremiah wounded and Noah’s marital status in jeopardy. But Noah remains faithful to God and trusts that she will be able to forge a future with her sisters. Will they be able to settle their land together, or will Noah get left behind?