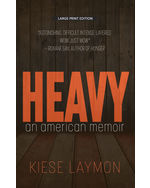 In Heavy, Laymon writes eloquently and honestly about growing up a hard-headed black son to a complicated and brilliant black mother in Jackson, Mississippi. From his early experiences of sexual violence, to his suspension from college, to time in New York as a college professor, Laymon charts his complex relationship with his mother, grandmother, anorexia, obesity, sex, writing, and ultimately gambling. Heavy is a “gorgeous, gutting . . . generous” (The New York Times) memoir that combines personal stories with piercing intellect to reflect both on the strife of American society and on Laymon’s experiences with abuse. By attempting to name secrets and lies he and his mother spent a lifetime avoiding, he asks us to confront the terrifying possibility that few in this nation actually know how to responsibly love, and even fewer want to live under the weight of actually becoming free.

“Stylish and complex . . . Laymon convincingly conveys that difficult times can be overcome with humor and self-love, as he makes readers confront their own fears and insecurities.”

“A challenging memoir about black-white relations, income inequality, mother-son dynamics, Mississippi byways, lack of personal self-control, education from kindergarten through graduate school, and so much more. At times, the author examines his complicated romantic and sexual relationships, and he also delves insightfully into politics, literature, feminism, and injustice, among other topics. A dynamic memoir that is unsettling in all the best ways.”

“Spectacular . . . So artfully crafted, miraculously personal, and continuously disarming, this is, at its essence, powerful writing about the power of writing.”

“With echoes of Roxane Gay and John Edgar Wideman, Laymon defiantly exposes the ‘aches and changes’ of growing up black in this raw, cathartic memoir reckoning with his turbulent Mississippi childhood, adolescent obesity, and the white gaze.”