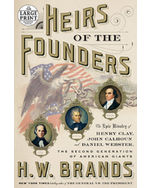 Heirs of the Founders: The Epic Rivalry of Henry Clay, John Calhoun and Daniel Webster, the Second Generation of Maerican Giants

In the early days of the nineteenth century, three young men strode onto the national stage, elected to Congress at a moment when the Founding Fathers were beginning to retire to their farms. Daniel Webster of Massachusetts, a champion orator known for his eloquence, spoke for the North and its business class. Henry Clay of Kentucky, as dashing as he was ambitious, embodied the hopes of the rising West. South Carolina's John Calhoun, with piercing eyes and an even more piercing intellect, defended the South and slavery.