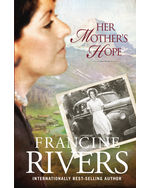 This is the first in a two-book saga that explores the complicated relationships between mothers and daughters over four generations near the turn of the 20th century. Fiery Marta leaves Switzerland determined to find life on her own terms. Marta's experiences convince her that only the strong survive -- and she determines to raise strong children. Marta's oldest daughter, Hildie, finds her calling as a nurse which gives her independence if not the respect of her mother. When Hildie starts a family of her own, she's determined that her daughter never doubt her love -- but the challenges of life conspire against her vow. Each mother is forced to confront her faulty, but well-meaning desire to help her daughter find her place in the world.

Francine Rivers has published numerous novels -- all bestsellers -- and she continues to win both industry acclaim and reader loyalty around the globe. She has been awarded or nominated for numerous awards: the RITA Award, the Christy Award, the ECPA Gold Medallion and the Holt Medallion in Honor of Outstanding Literary Talent. Her novels have been translated into 20 different languages.

"The first in a two-part saga about four women, Rivers' novel will appeal to readers who enjoy historical fiction and sweeping family sagas with exotic settings. As her compelling characters seek to do what they feel their faith demands, Rivers sets their resonant struggles against dusty streets, windswept Canadian plains, and California vineyards in vivid scenes readers will not soon forget." -- Booklist

"Writers like Rivers are why people buy Christian fiction: it's dramatic, engaging, and acknowledges the bedroom without going inside. This well-told tale will have readers eagerly awaiting the story's resolution." -- Publishers Weekly