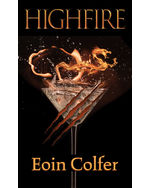 In the days of yore, he flew the skies and scorched angry mobs — now he hides from swamp tour boats and rises only with the greatest reluctance from his Laz-Z-Boy recliner. Laying low in the bayou, this once-magnificent fire breather has been reduced to lighting Marlboros with nose sparks, swilling Absolut in a Flashdance T-shirt, and binging Netflix in a fishing shack. For centuries, he struck fear in hearts far and wide as Wyvern, Lord Highfire of the Highfire Eyrie — now he goes by Vern. However . . . he has survived, unlike the rest. He is the last dragon. There’s about to be a fiery reckoning, in which either dragons finally go extinct — or Vern’s glory days are back.