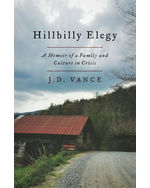 Hillbilly Elegy: A Memoir of a Family and Culture in Crisis

Hillbilly Elegy is a passionate and personal analysis of a culture in crisis — that of white working-class Americans. The decline of this group, a demographic of our country that has been slowly disintegrating over forty years, has been reported on with growing frequency and alarm, but has never before been written about as searingly from the inside.

In this understated, engaging debut, the author reflects on his stormy journey . . . An unusually timely and deeply affecting view of a social class whose health and economic problems are making headlines in this election year.

Vance compellingly describes the terrible toll that alcoholism, drug abuse, and an unrelenting code of honor took on his family, neither excusing the behavior nor condemning it . . . The portrait that emerges is a complex one . . . Unerringly forthright, remarkably insightful, and refreshingly focused, Hillbilly Elegy is the cry of a community in crisis.

Both heartbreaking and heartwarming, this memoir is akin to investigative journalism. . . . A quick and engaging read, this book is well suited to anyone interested in a study of modern America, as Vance’s assertions about Appalachia are far more reaching.