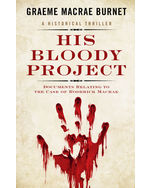 His Bloody Project: Documents Relating to the Case of Roderick Macrae

A Man Booker Prize Finalist
A New York Times Editors' Choice
Named a Best Book of 2016 by Newsweek, NPR, The Guardian, The Telegraph, and The Sunday Times

A brutal triple murder in a remote Scottish farming community in 1869 leads to the arrest of seventeen-year-old Roderick Macrae. There is no question that Macrae committed this terrible act. What would lead such a shy and intelligent boy down this bloody path? And will he hang for his crime?

Presented as a collection of documents discovered by the author, His Bloody Project opens with a series of police statements taken from the villagers of Culdie, Ross-shire. They offer conflicting impressions of the accused; one interviewee recalls Macrae as a gentle and quiet child, while another details him as evil and wicked. Chief among the papers is Roderick Macrae’s own memoirs where he outlines the series of events leading up to the murder in eloquent and affectless prose. There follow medical reports, psychological evaluations, a courtroom transcript from the trial, and other documents that throw both Macrae’s motive and his sanity into question.

“The clever tale is told through a collection of historical documents, including Roddy’s written confession, interviews with villagers and a report by a criminal psychologist. The ingenious structure provides for a unique sociological study couched in a chilling true crime investigation. The period language and poetic descriptions of place will enthrall readers of historical fiction. For fans of Iain Pears and Umberto Eco.” — Bill's Bookshelf Selector, Bill Kelly

“It’s only a story or is it? Graeme Macrae Burnet makes such masterly use of the narrative form that the horrifying tale he tells in His Bloody Project, a finalist for this year’s Man Booker Prize, seems plucked straight out of Scotland’s sanguinary historical archives.”