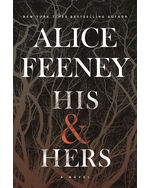 Anna Andrews has worked hard to get her dream job as a BBC news TV presenter, putting work before friends and family. Anna is covering a murder in Blackdown — the village where she grew up — and the victim turns out to be a childhood friend. But it soon become clear that Anna isn’t just covering the story, she’s at the heart of it. When Detective Jack Harper left London, he never thought he’d end up working in a place like Blackdown. When the body of a young woman is discovered, Jack doesn’t reveal that he knew the victim, and now he is a suspect in the murder. Between Anna and Jack, someone isn’t telling the truth — and some secrets are worth killing to keep.

“[A] cunningly constructed psychological thriller . . . Feeney does a masterly job of folding in layers of several characters’ troubled shared pasts and explosive secrets. The breathtaking finale is sure to blindside readers. This is a masterpiece of misdirection.”

“A taut suspense plot, many gleeful twists and turns, and suspects galore.”