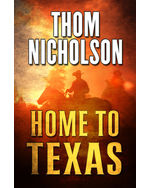 As 1864 looms near, Doctor Travis Sasser, General John Bell Hood’s battle surgeon, is captured and sent to the Union POW camp. He’s resigned to sitting out the war in the “escape-proof” prison until he gets a letter from home. Sasser’s father is seriously ill, and the carpetbaggers are trying to get his ranch. It’s time to put down the surgeon’s scalpel and pick up a Spenser.