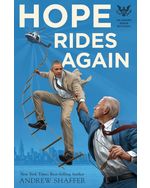 Following his book tour, Joe Biden stops in Chicago, where the Obama Foundation is holding a global economics forum. Joe and Barack Obama barely have time to catch up before another mystery lands in their laps: Obama's prized Blackberry is stolen. When the suspect turns up comatose from a gunshot wound, local police write it off as a gangland shooting. But Joe and Obama smell a rat. In a race to find the shooter, Joe and Obama butt heads with their former compadre, Mayor Rahm Emanuel; follow a trail of clues through Chicago's South Side; go undercover inside a Prohibition-era speakeasy; and scale the Tribune Tower.