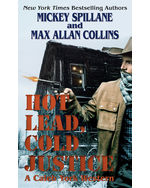 In the Southwest town of Trinidad, two gunshots fell Sheriff Caleb York’s unlucky deputy. As sure as the blood pooling in the snow, York knows it was a case of mistaken identity. The bullets were meant for him. It’s the first nasty step in a plan rustled up by former Quantrill’s Raider Luke “Burn ‘Em” Burnham — eliminate the law, corral a team to rob a bank in booming Las Vegas, New Mexico, then lay low. Then they get wind of one little hitch: not only is York still alive, but he’s gunning for justice — and revenge. As a chilling cat-and-mouse begins, York isn’t about to let Burnham and his damnable gang get away.