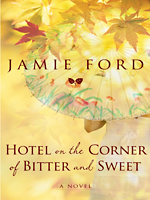 In 1986 Henry Lee, a Chinese American widower, comes upon a crowd gathered outside the Panama Hotel, once the gateway to Seattle’s Japantown. It has been boarded up for decades, but now a new owner has made an incredible discovery: the belongings of Japanese families left behind when they were rounded up and sent to internment camps during World War II. As Henry looks on, memories take him back to the 1940s and an innocent love.

“… a vivid picture of a confusing and critical time in American history.” — Library Journal