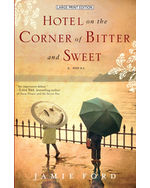 Set during one of the most conflicted and volatile times in American history‚ Hotel on the Corner of Bitter and Sweet is an extraordinary story of commitment and enduring hope.

The opening of a Japanese parasol takes old Henry Lee on a reminiscent journey back to the 1940s‚ at the height of the war‚ when young Henry”s world is a jumble of confusion and excitement‚ and to his father‚ who is obsessed with the war in China and having Henry grow up American.

“A timely debut that not only reminds readers of a shameful episode in American history‚ but cautions us to examine the present and take heed we don’t repeat those injustices.”mdash; Kirkus Reviews