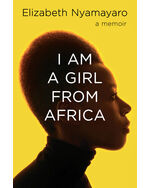 
I Am a Girl from Africa: A Memoir

When severe draught hit her village in Zimbabwe, Elizabeth, then eight, had no idea this moment would come to define her life purpose. Unable to move from hunger, she encountered a United Nations aid worker who saved her life. Elizabeth vowed to dedicate her life to giving back to her community, her continent, and the world. I Am a Girl from Africa charts Elizabeth’s pursuit of her dream from the village of Goromonzi to Harare, London, and New York, where she became a Senior Advisor at the United Nations and launched HeForShe, one of the world’s largest global solidarity movements for gender equality.