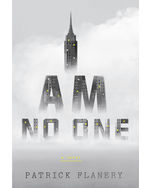 I Am No One

After a decade in England, Jeremy O’Keefe returns to New York and his life begins taking strange turns: records of his online activity are delivered to his apartment, he’s being followed, and his elderly mother receives phone calls slandering him. From the author of Absolution comes a mesmerizing novel about memory, privacy, fear, and what happens when our past catches up with us.

“This cerebral, slow-building yarn will have readers racing to untangle the central puzzle, while being complicit in the meta-awareness that the novel itself is a form of surveillance. The language cleverly hints at the disassociated state of our narrator while relentlessly guiding the reader through a trenchant observation of the modern condition. The post-Snowden era has produced its first philosophical thriller. For fans of DeLillo, Cory Doctorow and Mr. Robot.” — Bill's Bookshelf Selector, Bill Kelly

“A brilliant commentary on pervasive government intrusion into the private lives of citizens . . . [and] an excellent portrayal of a good man manipulated by others, without ever understanding why.”