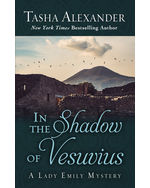 In the Shadow of Vesuvius

When Emily discovers a body hidden in plain sight amongst the ruins of Pompeii, she sets in motion a deadly chain of events that ties her future to the fate of a woman whose story had been lost for nearly two thousand years. Emily and her husband, Colin Hargreaves, uncover a corpse, which the police dismiss as the work of local gangsters, so Emily launches her own investigation. The appearance of a young woman who claims a shocking relationship to the Hargreaves family throws Emily’s investigation off-course. Emily resolves to unearth the facts. But how far can she dig before she risks burying herself along with the truth?