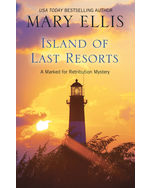 A Marked for Retribution Mystery

Kate Weller’s boss, Nate Price, has some exciting news: Julian Frazier, a friend of one of the agency’s wealthy clients, has invited the Nate Price Investigations team and their partners on a trip to his home on Elysian Island, an exclusive retreat off the Georgian coast. But there’s a catch. Frazier has written his own murder mystery script, and the PIs must work out whodunnit. As they’re about to discover, though, the murder Frazier wants them to solve has a killer twist that isn’t in the script. Unable to reach Elysian Island and her co-workers, Kate is sure that someone wants her to stay away. Can she stop a ruthless killer and uncover the truth behind a deadly game?