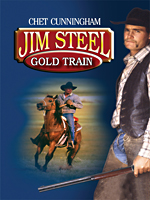 On a train out of Denver‚ Jim Steel was protecting something in the safe as a favor to a banker friend when two robbers caught him off-guard‚ took a young girl hostage‚ and attempted to blow up the safe. Reacting quickly‚ Steel saved the contents of the safe and the young girl’s life. Once in Sacramento‚ however‚ the girl started screaming that Steel had tried to rape her. Now he had a choice to make: swing at the end of a rope‚ or face certain death on the tracks.